The water creates the fireload, the thirst for the match’s crazy love.

Welcome to Nobody’s Property, a hybrid fiction. Each week I’ll bring you a chapter with fresh writing, archival photos, letters, and other ephemera, and a podcast episode to chew on. Here’s the situation—and the story:

Jenny, just turned 18, goes missing in a frigid forest. She’s been hitchhiking. First she caught a ride with a trucker, then with a West German soldier. Maybe she was trying to visit a young professor she’d met on the boat over from New York.

On that crossing, he’d heard her say she might throw herself overboard.

Emily, just turned three, lives with her parents in a house in Laurel Canyon that lets the California rain in. Her biggest fear is of the brown snails in the garden; she will not cross the brick path if one is there. It’s her father’s twenty-sixth birthday. On this day, his sister Jenny’s remains are found. Officially, she died of exposure, although a murder investigation is begun.

Rose, a housekeeper at a tourist villa, discovers a podcast Emily has produced, remembering her childhood in gorgeous 1970s L.A. Rose remembers along with her. In episodes accompanied by aching music, Emily recounts her trip to Germany to search for the story of what happened to her Aunt Jenny. Does Rose hold the missing clues to the mystery?

Rose has left Jenny alone for a few years, but now they’re traveling together again.

ekc
California, United States
E.K. Cooke lives and writes on the edge of Silicon Valley. They currently live with their husband, one teenager, two cats, three chickens, and one old blind dog. 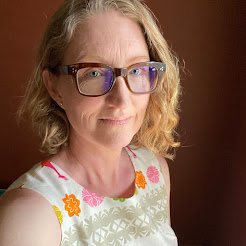